skip to main | skip to sidebar

STP, short for "SysTrayPlay", is an MP3 player made in Russia by Youri Strous.
Home page: http://stp.byteact.com/

This tiny music player is contained in a single executable file about 200k in size. Despite the small size, STP has everything you need to easily listen to and manage your MP3 collection. It's designed to stay out of your way and provide music while you are busy doing other things on your PC.

Installation and first use:
This program is offered as a ZIP file collection. Since STP is a single EXE file, you can unzip and place the STP.EXE file anywhere on your hard drive. As far as I can tell it's completely portable and you should be able to use it from a flash drive or any other media.

Once you launch it, you'll see the STP icon in your system tray. It will save it's own settings in an STP.INI file after it's started.

A right single click on the STP icon reveals all the settings, controls and options. Normal left single mouse clicks will pause and play the current song. You can assign other functions to both right and left double and triple clicks of the mouse.

Using the STP minibar:
Under the Windows menu, STP can be set to display a "minibar" interface that many people will recognize as common in music players. The minibar can be dragged around on the screen by grabbing the dark grey rectangle on the right end.

The minibar also displays the standard Play, Pause, Stop, Forward and Backward buttons. The next "now playing" field is active and clicking on it will cause the player to jump to different portions of the song almost instantly. The next field shows the volume as a percentage. Clicking on the volume field allows you to change the volume up and down.

After the volume field, you can see that there are 5 letters displayed. Clicking on the letters "I E P T A" provides quick access to many of the often used player functions.

I - brings up up "MP3 Info" on the currently playing song where you can also edit the ID3 tags. 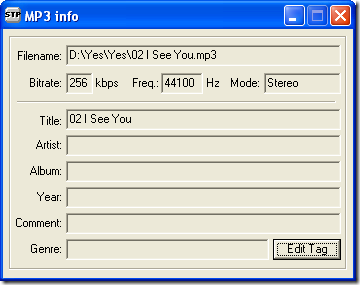 E - launches the built in "Equalizer" which allows you to adjust the sound frequencies and save or load EQ settings. 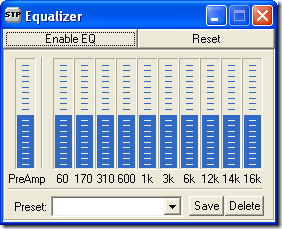 P - displays a playlist which can be saved as M3U or PLS files. MP3 files can be dragged and dropped on the playlist and once there, they can be re-ordered by dragging them up or down in the list. Playlists can also be searched by typing in the "Find Track" field at the top of the playlist. 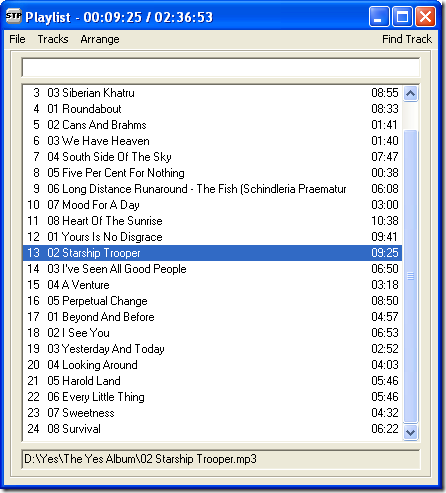 T - shows the "Tracks" menus which I'd say should really be called the "Folders" because it allows you to see all the music folders that your current playlist is using.

A - shows "Album" menu with the current music folder and the songs in it.

That basically covers using the "minibar" interface. I prefer using only the systray icon along with some custom hotkeys.

Using Hotkeys instead of the minibar:
You can set your own custom hotkeys in STP by going to the Settings / Advanced menu. You'll find lots of other goodies in this settings menu, but let's focus on the hotkeys which can be accessed by hitting the "Hotkeys" button at the bottom. Almost every function of STP can be accessed by hotkeys that you can define. 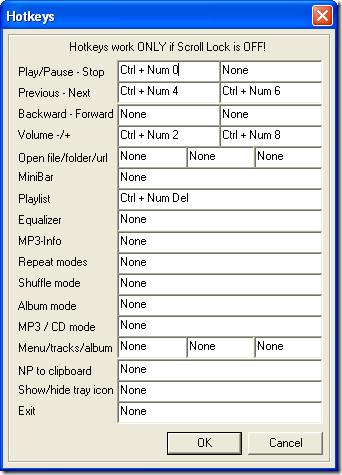 As you can see, I only use a few of the hotkeys such as Play/Pause, Prev/Next and Volume. Those alone are enough to keep me from having to click open any other menus while using STP.

Conclusion:
There are very few MP3 players that are smaller than STP and I'd have to give it 5 stars for cramming in all of it's features in such a small and completely portable package. It's a shame that the author is no longer actively developing this application. On the other hand, what more does it need?